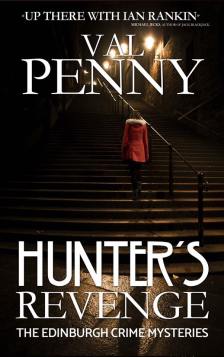 Hunter by name – Hunter by nature: DI Hunter Wilson will not rest until his friend’s death is revenged.

DI Hunter Wilson is called to the scene of a murder. He is shocked to find the victim is his friend and colleague, George Reinbold. Who would want to harm the quiet, old man? Why was a book worth £23,000 delivered to him that morning? Why is the security in George’s home so intense? Hunter must investigate his friend’s past as well as the present to identify the killer and identify George’s killer. Hunter also finds a new supply of cocaine from Peru flooding HMP Edinburgh and the city. The courier leads Hunter to the criminal gang but Hunter requires the help of his nemesis, the former Chief Constable, Sir Peter Myerscough and local gangster Ian Thomson to make his case. Hunter’s perseverance and patience are put to the test time after time in this taut crime thriller.

Much of the action in Hunter’s Revenge revolves around the car showroom and garage Thomson’s Top Cars. Here we meet Jamie and Frankie who are running the business while Jamie’s father, Ian, is in jail.

“I’m glad we’re doing this together,” Jamie said to his cousin. “I know having to leave us in charge is stressing Pop out!”

“Aye, probably more stress than his time in prison could ever have done. But at least you’ve passed your driving test now.”

Frankie could have been reading his uncle’s mind. Ian Thomson had just under two months to go before he was eligible for parole, and in the meantime could only hope that Jamie and Frankie didn’t do anything too stupid to ruin his business. At least the wee receptionist, Jenny Kozlowski, seemed to have a bit of common sense.

“I’ll be a bit late in today, Frankie, can you hold the fort?”

“Nothing much. It’s just that it’s Jenny’s birthday, and I’m going to pick up cakes for all of us for coffee break.”

“If it’s her birthday, she should buy the cakes. That’s what the rest of us all do,” Frankie protested. “You fancy her, don’t you?”

“Aye you do. Well, I won’t tell the guys in the workshop, if I can get a chocky doughnut.”

“Am I getting a chocky doughnut, then?”

Jamie was disappointed to see Frankie at the reception desk when he walked in.

“Where’s Jenny, cuz?” he called over to Frankie.

“Dunno. Not even a phone call. And she’s well late now.”

“Well, she must be somewhere, her coat’s here. She looks good in red.”

“Well she’s not anywhere, as far as I can see.”

“She’s usually early. Wonder what’s up.” Jamie rubbed his hands together. It might be spring according to the time of year, but with its wide glass front and the open garage at the back, the showroom was cold.

“She maybe went to get cakes,” Frankie suggested hopefully.

“Without her coat? I doubt it!” Jamie retorted.

“Well, she was probably out on the lash last night and slept in.”

“Could be, but I still can’t see her leaving last night without her coat.” Jamie shrugged and turned away, trying to hide his disappointment. “It’s fucking freezing in here. I’ll make us a coffee first to warm us up, then I’ll try phoning her.”

“Phone her first, Jamie. You know you want to.”

When Jamie wandered back to reception from the office he plonked a mug of coffee in front of Frankie.

“Her mam says she never went home last night. Do you know if she was going out with pals or the like?”

“I don’t know. You gave that guy a test drive in the Bentley and I went home. A fellow came in just as I was leaving, but Jenny said she would see to him because she would stay on and lock up with you.” Frankie smiled. “I thought, aye aye, nudge nudge, say no more. So off I went. I picked up the twins from their child minder on the way home. You know?”

Jamie frowned. “She wasn’t here when I got back, and the showroom wasn’t locked up. I was pretty pissed off about that. But I couldn’t see nothing missing, so when the guy said he wanted to think about the Bentley, I just locked up and came home.”

“Nothing was missing except Jenny, you mean.”

“I didn’t know that. I thought you’d both just buggered off.”

“Like we’d ever do that. Your pop would skin us alive when he got hold of us. Do you think I’ve got a death wish?”

“Funny accent the man had,” Jamie said. “European or something.”

“Jamie?” The head mechanic, Gary, called across the showroom. “Where’s that old blue Volvo that was waiting to go through its service?”

“What old Volvo? I don’t know. Don’t you keep a log of all the cars you work on?” Jamie asked angrily.

“Aye, but we didn’t get to this one yesterday. It was just waiting outside for us to get started this morning. The customer asked us to give it a service, then put it up for sale. Said he had a buyer for it who’d pay eight grand, but he might need a test drive first. I told him he’d need a brain test if he was paying that much for that car. But it seems like he was right; it must have been sold. ”

“So what happened to the paperwork?” Jamie shouted. “We’ve not sold any fucking old Volvo. Where is the damn thing?”

“So what do I do now? Jenny’s not in, and a fucking car has gone missing. This is a truly rubbish start to the day. Pop is going to bloody skin me.”

Frankie shrugged, “Phone Jenny’s mam back? Maybe the man she spoke to took the Volvo.”

“I suppose I should. I don’t fancy it though. She shouts. I don’t think she likes me. Then what do I tell Pop about the car?”

“I think you’ll need a chocky doughnut before you do that. I know I will!”

“I’ll need more than a fucking chocky doughnut, Frankie, if we’ve lost one of his customer’s cars.”

Val Penny is an American author living in SW Scotland. She has two adult daughters of whom she is justly proud and lives with her husband and two cats. She has a Law degree from Edinburgh University and her MSc from Napier University. She has had many jobs including hairdresser, waitress, lawyer, banker, azalea farmer and lecturer. However she has not yet achieved either of her childhood dreams of being a ballerina or owning a candy store. Until those dreams come true, she has turned her hand to writing poetry, short stories and novels. Her crime novels, ‘Hunter’s Chase’ and Hunter’s Revenge are set in Edinburgh, Scotland, published by Crooked Cat Books.